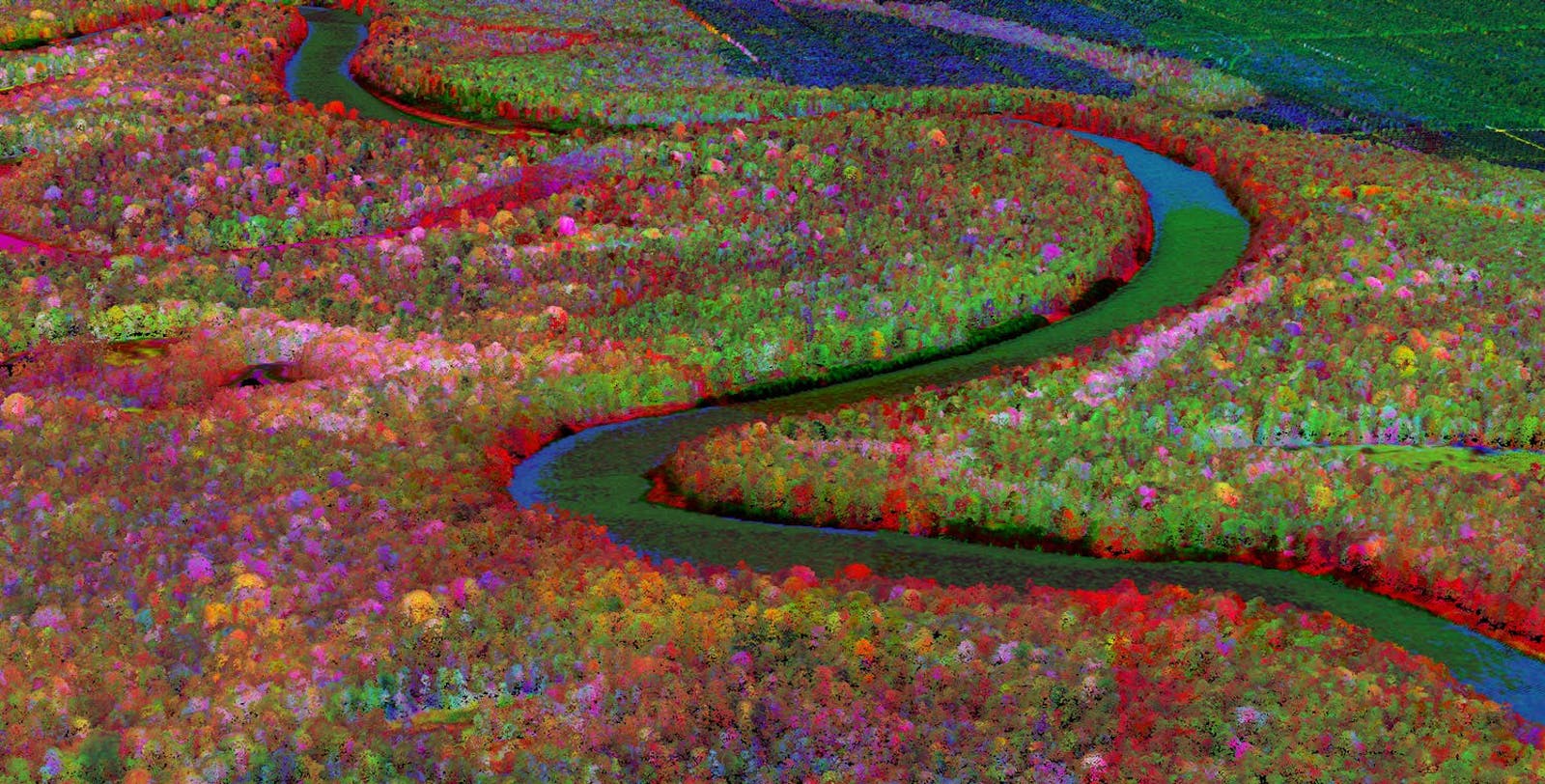 Introduction
Across all ecosystems, biological diversity is under enormous and increasing threat due to climate change and other human pressures. Responding to this problem requires strategies that integrate elements of governance, economics, human welfare, and other societal factors. It also requires the use of a science-based approach to develop safe havens for biodiversity, both in the long term and as immediate interventions within crisis landscapes to prevent potential extinction events and ecosystem ‘tipping points’ from occurring.

While the new satellite-mounted sensors are intended principally to track greenhouse gas emissions at high resolution (CO2, methane and nitrous oxide), with a modest level of additional funding they can be leveraged to support the mapping of beta diversity, or species complexity, of forest and coastal ecosystems using an advanced remote sensing process known as Spectranomics. Pioneered by Dr. Greg Asner, Spectranomics links plant canopy species and their functional traits to their spectral-optical properties based on a group of 21 elemental and molecular properties in plant canopy leaves, some of which support growth (such as nitrogen and photosynthetic pigments) and others that provide defense (like polyphenols and lignin) (Asner & Martin, 2016).

Based on the way plant foliage chemicals interact with sunlight, distinct species can be detected remotely, creating maps that reveal beta diversity in a given ecosystem -- the ratio between regional and local species diversity. Previously, using airborne laser-guided imaging spectroscopy (LGIS), Dr. Asner and his team have developed forest beta diversity maps of the Peruvian and Ecuadorian Andes and Amazon regions, working in partnership with local and national governments to provide a spatially comprehensive assessment of the efficacy of current forest protections and identification of biodiversity hotspots. Maps have also been created for the modeling of drought dynamics in the California Sierra Nevada and coral reef health and resilience in Hawaii. A research campaign in Borneo, one of the most biodiverse regions on Earth, influenced the establishment of an expanded protected area network in Malaysia focusing on forest areas with high beta diversity and carbon storage capacity.

As global temperatures rise to 1.5°C, protecting and conserving areas with high beta diversity will be of the utmost importance, as these ecosystems will be more resilient to changes in temperature and other climatic factors, increasing the survival of rare and threatened species. Having the capability to map high beta diversity areas will be particularly important in the current moment, as ambitious conservation targets are now being set under the UN post-2020 Global Biodiversity Framework, more than doubling the current extent of protected areas on land and quadrupling the extent in the oceans. It is estimated that $150 billion annually will be spent on protecting and conserving nature by 2030 to achieve these goals.

"This decade represents an all-hands-on-deck moment for humanity to make critical progress in addressing climate change," said Riley Duren, Carbon Mapper CEO and research scientist at the University of Arizona. "Our mission is to help fill gaps in the emerging global ecosystem of… monitoring systems by delivering data that's timely, actionable and accessible for science-based decision making."

Currently, the prioritization of new areas for conservation is often undertaken with incomplete and/or outdated information on the geographical extent of plant and animal assemblages. This is particularly concerning as more than 70 countries (including the U.S.) have signed on to a commitment to protect 30% of lands and oceans by 2030. How will these areas be prioritized? While progress is being made on prioritization of potential conservation areas, without high fidelity spatial data products pinpointing the areas of greatest beta diversity, this task will be difficult to achieve in the context of climate change.

Leveraging the spectral data produced by the Carbon Mapper satellites, these instruments will allow humanity, for the first time, to directly observe biodiversity from space, inaugurating a new era in conservation science. Satellite data will be streamed to cloud-based computer storage housed at the Asner-led Center for Global Discovery and Conservation Science at ASU and analyzed by advanced machine learning algorithms to produce more than a dozen novel indicators, informing maps of terrestrial plant biodiversity and carbon storage, habitat connectivity, and coastal marine biodiversity.

Timeline
NASA JPL will deliver the hyperspectral imaging spectrometers for the first Carbon Mapper satellite launch in 2023, loaded with state-of-the-art remote sensing technology developed over a decade on heritage on aircraft and spacecraft. JPL will also provide technical assistance to Planet's development of the payload for the additional satellites. These spectrometers offer unparalleled sensitivity, resolution, and versatility.

Planet, operator of the largest-ever fleet of earth imaging satellites, will design and build the satellites and operate the fleet with its existing missions system architecture. Planet will further contribute data for use by governments, private and public institutions, citizens, and more. Planet's ability to commercialize data products is key to the buildout and continuity of the multi-satellite constellation.

A relatively modest investment in the world’s first global spectral monitoring hub for biodiversity could influence the allocation of hundreds of billions of dollars over the decade by driving a state-of-the-art decision support system accessible to governments, civil society, and the private sector. This could facilitate a rapid reversal of biodiversity loss by providing a quantum leap in humanity’s ability to see and understand the complexity of the ecosystems that make life on Earth possible.

About the Center for Global Discovery (ASU)
The Center for Global Discovery & Conservation Science leads scientific and technological research focused on mitigating and adapting to global environmental change through advanced geospatial mapping and monitoring, remote sensing, and artificial intelligence. Housed at ASU, recognized as the #1 scientific institute in the United States, the center hosts nine research laboratories and leads numerous projects, including the Allen Coral Atlas, the Airborne Observatory -- which pioneered novel spectranomics remote sensing technologies -- as well as the machine learning and AI deployment for Carbon Mapper in partnership with Planet, which will deploy new advanced satellite sensors in 2023.